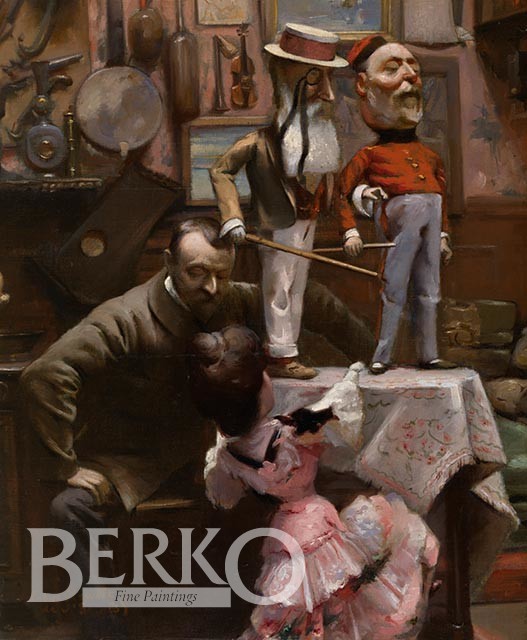 SIR JOHN HEWELT AND HIS PUPPETS

Charles-Albert de Saint-Genois de Grand Breucq came from an old noble family of Hainaut. His great-grandfather, François Joseph, Count of Saint-Genois, historian and genealogist, was Deputy for Hainaut to the Noble States. Settled in Prague after the Brabantine Revolution, he became Chamberlain to Emperor Francis II. Back in Tournay, the family endured the suppression of their feudal rights and other financial measures taken under Napoleon. Ruined, the Count waited for the fall of Bonaparte to assert his titles and was named First Herald of Arms of the United Kingdom of the Netherlands.

Charles-Albert was passionate about popular subjects, such as the circus, balls and street theaters. He highlighted faces at the expense of bodies, like puppets representing famous personalities.

The painting represents Sir John Hewelt and his puppets of Leopold II of Belgium and Edward VII of England.

The painter’s grandfather, theCount Ferdinand (1793-1838), seems to have led a tranquil existence as a magistrate. The daughter of Count Ferdinand, Charlotte Elisabeth, called the Countess of Saint-Genois de Grand-Breucq (1830-1900) settled in France, first in the North, and then in Asnières near Paris. Although single, she gave birth to three sons: Hippolyte Alexis, born in 1853, Paul Alfred, born in 1857, and Charles-Albert.

Passionate about art from an early age, Charles-Albert entered the Ecole des Beaux Arts in Paris where he followed the teachings of Joseph-Nicolas Robert-Fleury (1797-1890) and Fernand Humbert (1843-1934). The young artist formed a friendship with Henri Gervex (1852-1929) which had a decisive inuence on his career.

In 1885, Saint-Genois entered the Salon with ‘Au Moulin de la Galette’ (no 2172). The following year, he exhibited ‘A Rehearsal at the Concert-Café of the Ambassadors’, belonging to a certain M. Ducarre (no 2107). As was the case for many painters of the time, Saint-Genois was fond of popular entertainment: balls, circus, street theater, a universe he knew well on account of his brother Paul Alfred, who performed as a prestidigitator under the name of Dicksonn before directing a theater in Asnières. The painter participated in the exhibition organized by the latter in 1892 ‘on Bualo Billslands’ at Porte Maillot on the anniversary of Columbus landing in America. Charles-Albert was in charge of the ‘panoramic museum’, while his brother took care of the ‘theater of retrospective sorcery’. The public could also discover pantomimes, ‘diverse attractions’ and dance.