Léon Frédéric was a pupil of Jules Van Keirsblick and Jean-François Portaels at the Brussels Academy of Brussels. He stayed in Venice, Florence, Rome and Naples in Joseph Dillens’ company. He was influenced by Emile Wauters and later by the Preraphaelites. The first noteworthy works appeared around 1880. The art of Léon Frédéric exults in the expression of the person. A painter of mystical and symbolic scenes of the life of country people and workers, and also of ideal figures and realistic landscapes. Children play an important part in his art. The art of Léon Frédéric exults in the expression of the person. Even in his reminiscences, Léon Frédéric has always remained definitely personal. His works keep a quite special aspect and barely need a signature. The works of Léon Frédéric force recognition; they are both homogenous and varied and they stem from a supreme conscience. The sacred rythms of his work give it the religious signification of a kind of endless pantheistic feast, magnifying forces, God and creature in their relationship with earth. It acquires thereby the ampleness and unity of works in which the invention of a great artist is recognized. 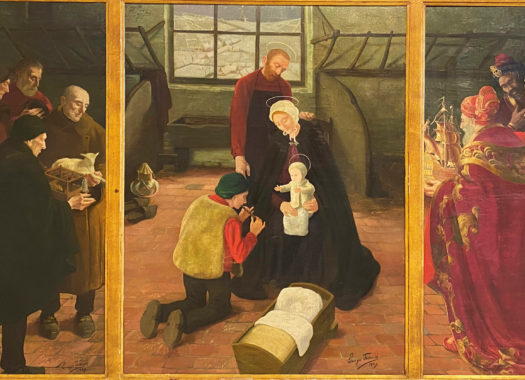