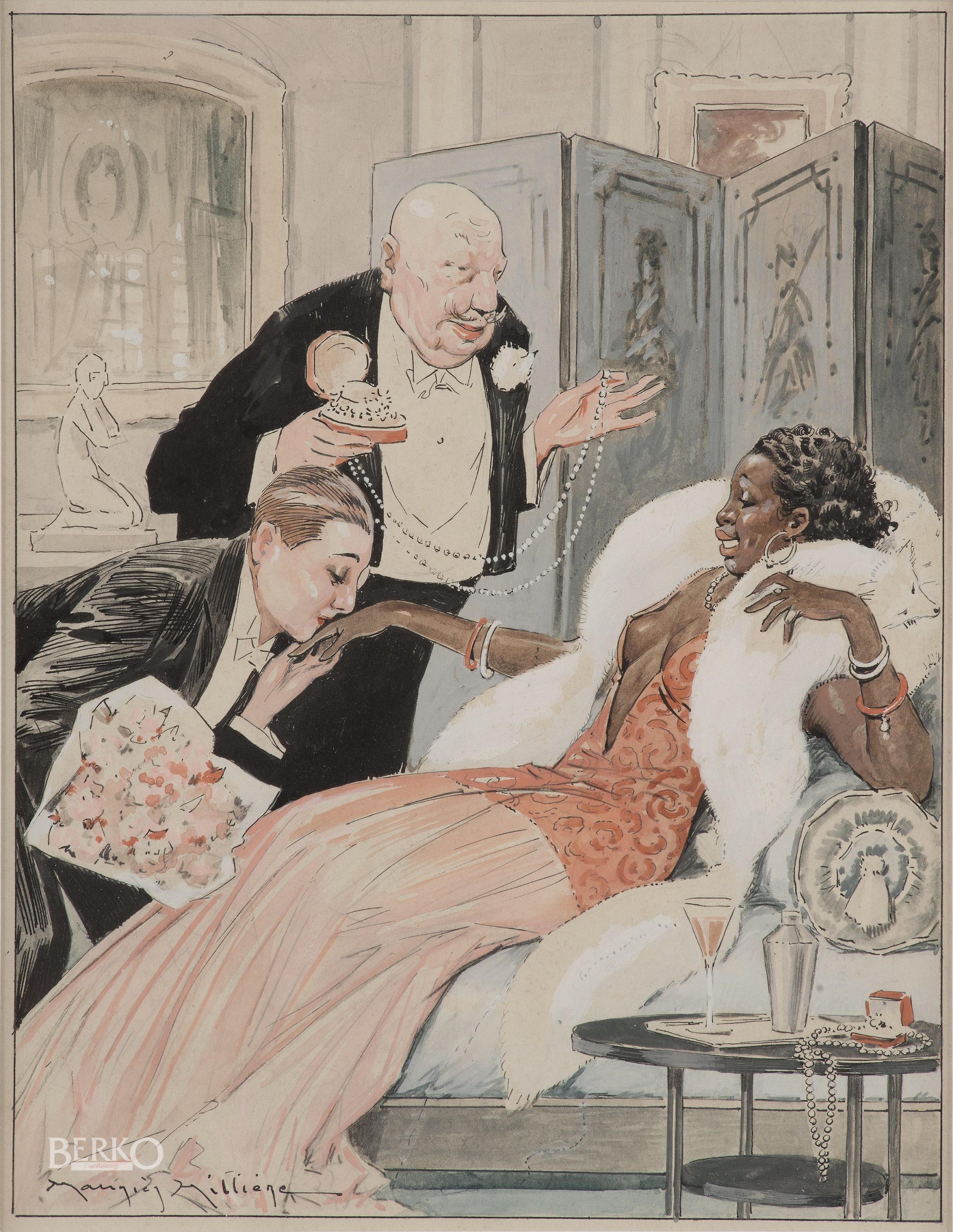 Maurice Millière studied with Léon Bonnat at the Ecole des Beaux-Arts in Paris, as well as at the Ecole des Arts Décoratifs. He exhibited his paintings at the Salon des Artistes Français in Paris. He was declared hors-concours and received a gold medal at the Exposition Coloniale in 1931. He also exhibited at the Salon des Humoristes in Paris. He was made a Chevalier de la Légion d’Honneur.

Millière mostly drew women in stages of undress. He collaborated on magazines, including “La vie Parisienne” and “Fantasio”. He engraved a large number of colour etchings and illustrated several works by Maurice Vaucaire.

Josephine Baker or Joséphine Baker, stage name of Freda Josephine McDonald (Saint Louis (Missouri), June 3, 1906 – Paris, April 12, 1975) was an American-French dancer, singer and actress.
Josephine Baker grew up in poverty. When she was fifteen she performed at the Vaudeville in Saint Louis. After this she moved to New York and made her Broadway debut in the early 1920s. After this she performed in Europe and South America, in Paris for the first time in 1925, at the Folies Bergère. During these years she also appeared on stage almost naked and became famous for her banana skirt and her erotic dancing. She often had a cheetah with her.
In 1937 she took on French citizenship by marrying the Frenchman Jean Lion and she settled permanently in France. During the Second World War, she did resistance work for the Résistance by using her position to obtain intelligence. For this she was later awarded the War Cross, the Commemorative Medal for the Volunteers of Free France and the Resistance Medal. In December 1957 she was made a Chevalier in the Légion d’Honneur.
Baker committed to the rights of Afro Americans after the war. For example, she refused to perform in segregated halls. In 1951 she was refused entry to a club in New York. Grace Kelly, who had been let in, immediately decided to leave the property with all her friends and never return. After this, Baker and Kelly became good friends. In 1963 she walked with Martin Luther King in the March on Washington where she was the only female speaker.