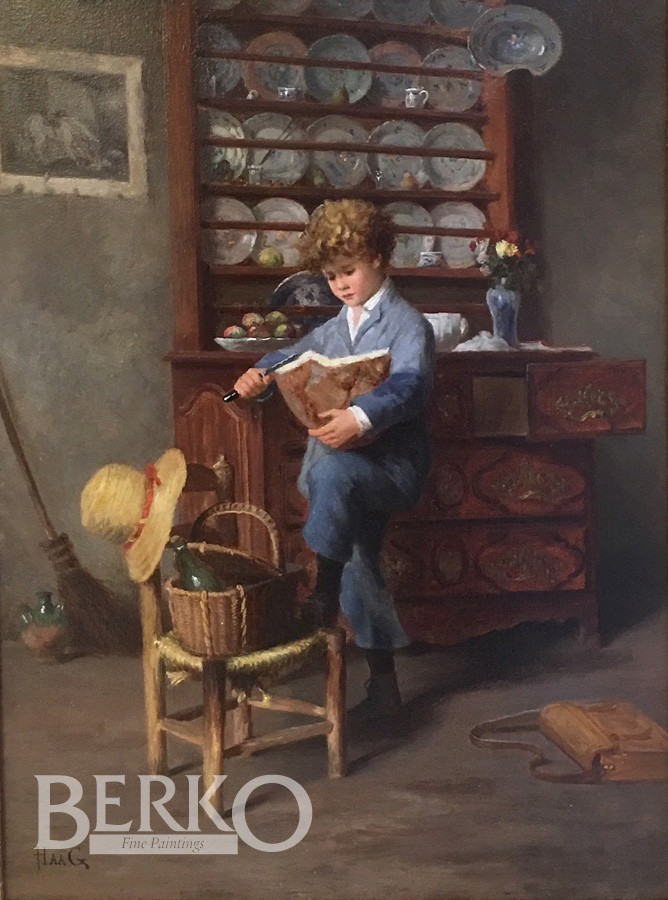 Carl Haag was a pupil of Albert Reindel at the Academy in Nurmberg and of Peter von Cornelius and Wilhelm von Kaulbach in Munich. He travelled to Belgium, France, Italy, Syria and Egypt, sharing a studio in Cairo with Frederick Goodall. He then set up in England, working both in London and in his studio at Oberwesel on the Rhine. He was a member of the Society of Painters in Watercolours and of the Royal Society of British Artists. He was painter to the court of the duke of Saxe-Coburg-Gotha. In 1859 he spent time in Jerusalem where he had the privilege, at the request of the queen of England, of being admitted to the interior of the Omar Mosque to paint the Holy Rock under the dome, where no painter had ever before been allowed to work. In 1878 he was appointed Chevalier de la Légion d’Honneur.
He abandoned oil painting little by little to devote himself exclusively to watercolour, elaborating his own technique in doing so: he applied pure colour on top of washes, stippled with the point of a brush and then scratched off the excess colour to obtain clear tones.
Haag executed paintings of oriental subjects, landscapes with figures after sites in the Tyrol and Italy, figures, architectural views and heads of women.
Haag exhibited in London, Vienna, where he was awarded a medal in 1873, and in Paris at the Exposition Universelle of 1878.